The History of Chevy Chase

Derived from the Scottish word for "border raid" and "chace" (meaning hunting grounds), the town of Chevy Chase was formed in the 1890s by the Chevy Chase Land Company. The land company eventually held over 1700 acres, including land that was originally patented to Colonel Joseph Belt from Lord Baltimore in 1725. A core section of 305 acres developed into Chevy Chase, MD.

Since the late 1800's, there has been a bridge where the current Duke Ellington Bridge resides. Before the bridge, Rock Creek made travel difficult to say the least. Those who wanted to cross had to go north toward the shallow side of the creek and then slowly make their way down a steep embankment.

The Chevy Chase Land Company, owned by Senator Francis Newlands, created the Rock Creek Railway Company so that new home buyers could make it to the north of the city. In order to relocate these home buyers, permanent bridges would have to be built over Rock Creek.

Initially, a wooden bridge was built in the 1870s between Adams Morgan and Woodley Park that led from Columbia Road to Connecticut Avenue. As more people relocated by train, the Edgemore Bridge Company built an iron truss bridge in place of the old wooden bridge in 1891. It cost $70,000, weighed over 1,200 tons and stood 755 feet tall.

In 1917 George Oakley Totten, Jr. was hired by the District Commissioner to design a new Calvert Street Bridge. His plans for a stone arch bridge were rejected by the Fine Arts Commission on the basis of cost. Although Totten, Jr. fought the decision for nearly a decade, the Arts Commission tossed out his plans and hired a new designer, Paul Crete, in 1933. Although Crete and the Arts Commission did not see eye to eye at first, they eventually approved of his plan for a bridge with multiple arches.

In order for people to cross Rock Creek, plans were made for the iron truss bridge to be moved 80 feet downstream. This amazing feat was undertaken by engineer John Eichleay, Jr. Under his direction, the piers of the bridge were placed on a wheeled track while workers cut the railroad tracks above. Using horses as a means of transporting the material, the bridge was moved in a little over seven hours.

After the new bridge was finished in 1935, the iron bridge was later removed. 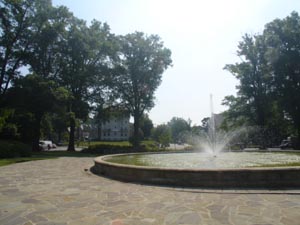